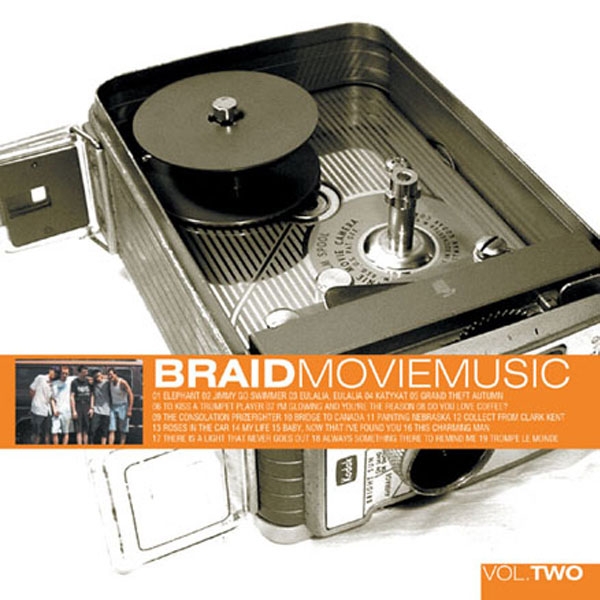 Songs were taken from the following compilations:

In addition, two songs were recorded at Steve Albini's pad, another remixed by Travis of the Dismemberment Plan, and there are a handful of eighties covers -- including Braid's cover of the Pixies "Trompe le Monde."

From their inception in 1993, Braid released nearly as many songs on 7"s, split 7"s, and compilations as on its three albums. The idea of finding all of the original masters to the songs and releasing them was conceived by Braid as early as 1997. Many of the songs were crowd favorites live, yet the releases they appeared on were dropping out-of-print. The demand continued to grow with the number of unavailable songs.

In August 1999, Braid decided to part ways after six years. The desire to digitally document the early releases was again voiced by the band. In October 1999, after two years of tracking down all of the original source tapes, Braid re-mastered each of Movie Music's 36 songs direct from the original masters. Movie Music was then broken into two separate releases to make room for lyrics and liner notes for all 36 songs along with nearly 100 photos.

All told, Movie Music Vol. 1 and 2 include 31 songs from singles, split singles, and compilations plus 5 previously unreleased songs. After being on Braid's "upcoming release itinerary" for over three years, practically every Braid fan anywhere had been waiting for Movie Music and in March 2000, the project was finally completed.