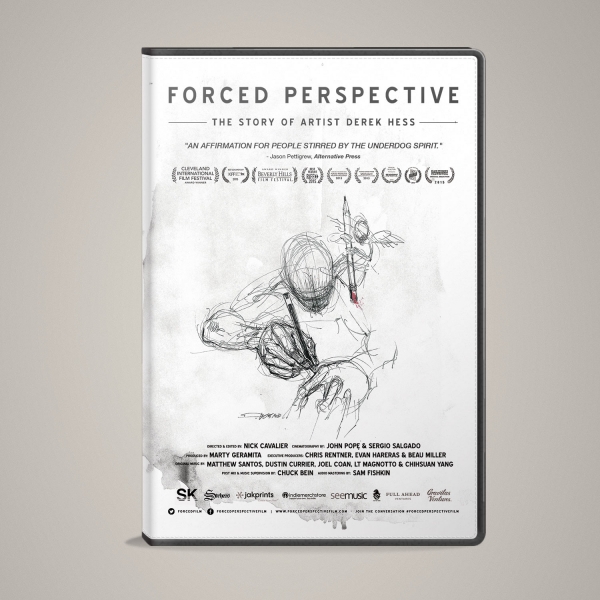 “Forced Perspective” is an intimate portrait of iconic artist Derek Hess by filmmaker Nick Cavalier. Since he was a young boy, Clevelander Derek Hess has had a “knack” for drawing. As the son of a WWII veteran and professor at the Cleveland Institute of Art, Hess also has had a deep appreciation for the discipline and training necessary for creative growth. Nick Cavalier’s FORCED PERSPECTIVE – evokes Hess’s favored artistic technique of manipulating an object’s size in order to create the illusion of distance. It also traces how these values transformed Hess from an unknown concert poster illustrator at Euclid Tavern into an internationally renowned t-shirt designer, post-hardcore concert organizer, and fine artist. In extensive interviews, Hess opens up about his artistic process as well as his ongoing trials with alcoholism and bipolar disorder. Through his intensely expressive mixed media art, Hess not only works through his demons, but also inspires his fans from around the world to do the same. An impressive tribute to Hess’s oeuvre, Cavalier’s documentary highlights the unique perspective this artist brings to the art world.
Director: Nick Cavalier
Running Time: 1 hour 36 mins