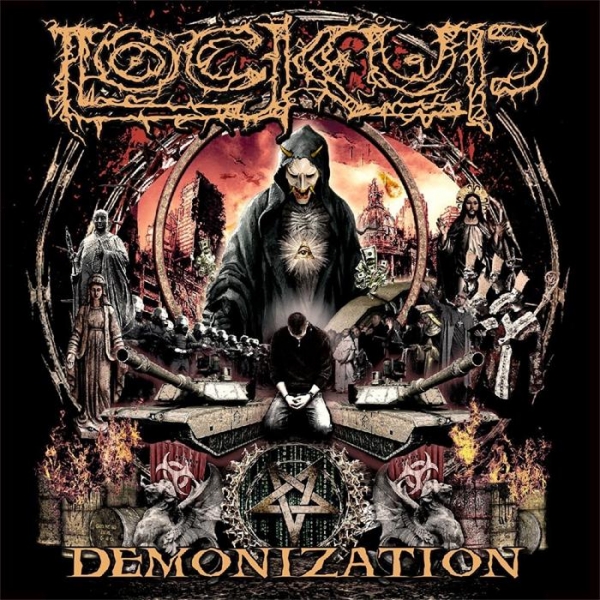 The World continues to sink deeper beyond repair...

After amicably parting company with long standing vocalist and metal brother Tomas Lindberg LOCK UP were honored to have Kevin Sharp step up to the plate and infuse the band with his unique take on pan-demonic  Grind & Death hybrid attack!

The Dregs of Hades have a new strand of demented DNA !.

The band' s new album "Demonization" has been long in the making for many reasons...

Logistically, the band is based in different corners of the globe. Life invades at any given moment to disrupt the thought process as it does for anyone in the world, But also at the same time the brutality of life has also inspired the band's creative process in many other
ways.

Lyrically this record deals with the rise and the fall and the rise again of the human consciousness. The struggle to resist the powers that be, the addiction of escape, the turmoil of reality and how to
survive through the carnage and come out on the other side stronger....the reborn phoenix!

Musically on the new album guitarist Anton Reisenegger's riffs scream out in every mutated direction - fast, heavy and darkly colorful, An homage to the underground from which the band members all came from, but at the same time setting new standards in extremity.

Nick Barker's drumming surpasses lightning speeds of precision.The chaos is joyfully indefinable as he charges through the compositions like a red bull to the flag of hate!

And last but not least Kevin Sharp; what else needs to be said ? 27 years of demonic guttural exorcisms that continue to inspire the world underdogs to get through another day at work.

It just doesn't get any better!
Watch the eagles fly...
DEMONIZATION !

More from Lock Up

There are the Mercyful Fate fans and there are the others... And you, which fan of the King are you ? Complete your… https://t.co/wd9yPfYNQL