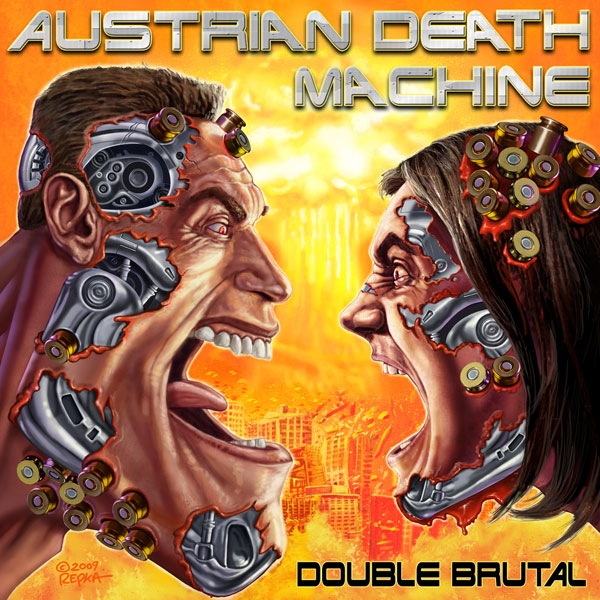 DISC 1:
1. Double Ahhnold
2. I Need Your Clothes, Your Boots, and Your Motorcycle (from Terminator 2)
3. Let Off Some Steam Bennett (from Commando)
4. Who Writes the Songs? (The Real Bomb Track)
5. It's Simple, If it Jiggles it's Fat (from Pumping Iron)
6. See You at the Party Richter (from Total Recall)
7. Hey Cookie Monster, Nothing is as Brutal as Neaahhh
8. Who Told You You Could Eat My Cookies? (from Jingle All the Way)
9. Come on Cohaagen, Give Deez People Ehyar (from Total Recall)
10. Who is Your Daddy, and What Does He 2?
11. Come on, Do it, Do it, Come on, Come on, Kill me, Do it Now (from Predator)
12. Allow Me To Break The Ice (from Batman & Robin)
13. Conan, What is Best in Life? (from Conan the Barbarian)

As I Lay Dying frontman Tim Lambesis and California frontman Ahhnold are back for round two with the release of AUSTRIAN DEATH MACHINEs Double Brutal, the follow up to 2008s highly successful (and, well, brutal) release, Total Brutal. With an appetite for all things barbarous, AUSTRIAN DEATH MACHINE ups the ante with Double Brutal. This two-disc goliath features one disc of all new heavy tracks in the tradition of all of Ahhnolds greatest cinematic moments and a second disc of cover songs including songs originally performed by METALLICA, MEGADETH, MISFITS, JUDAS PRIEST and more, with cover art once again being tackled by Ed Repka (MEGADETH, DEATH, NOFX, NUCLEAR ASSAULT, etc).