Search Account Cart 0
Back to Top
Early Graves We: The Guillotine CDs 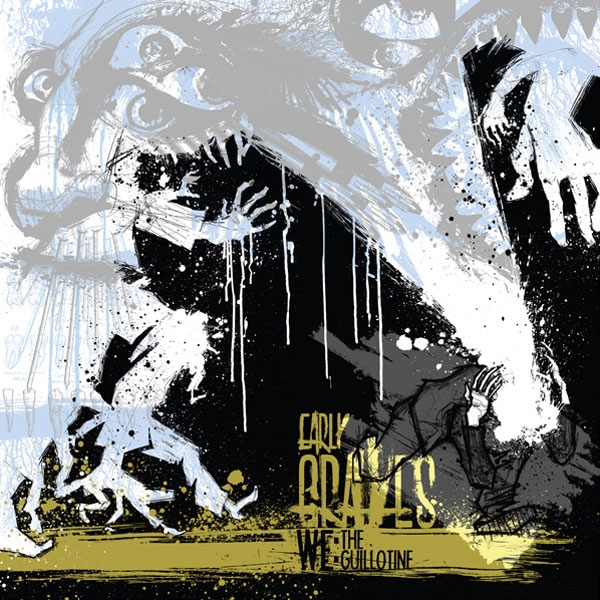 1. Ballistics
2. Safety Net Acrobats
3. House Nigger
4. First Name: William
5. Rest
6. Last Name: Porter
7. The Man In Black Fled Across The Desert
8. Ghosts Among Us
9. Borrowed Teeth, Borrowed Claws
10. Here There Be Monsters
11. City Of Angels of Nothing at All

After nearly two years of grueling DIY tours, a blown up van, incredible amounts of debt and nearly every original member of Apiary walking away, the remaining members decided to declare a new war at ground zero.

"The songs we had created on the road no longer had anything to do with what the original Apiary was about and we needed a new name that was a better fit and more relevant to who we are," states Chris Brock. "We wanted a name that meant burning your wick at both ends and saving nothing for no one."

Fusing the technical prowess of Carcass with the pissed off crust/punk of His Hero Is Gone and adding equal measures Entombed and Slayer into an already uncompromising style, Early Graves have now created a sound that is both difficult to categorize and is as destructive as it comes.

"We just wanted to create our version of an early punk record. Like how it was when we were kids first getting into punk, metal and hardcore. No frills. No gloss. No bullshit. We had no interest whatsoever in creating fake ass death metal breakdowns or tired arpeggio sweeps or whatever stupid ass bands think the "IN" thing is these days. Just punk, ya know? Just us punk kids staging diving on each other and circle pitting and letting it all go. Who gives a shit about the rest?" says vocalist Makh Daniels.

Recorded by the legendary and infamous Steve Austin of Today is Day (Converge, Deadguy, Lamb of God) in Nashville, TN at Austin Enterprises, EARLY GRAVES recorded their debut album within 10 days.

"We wanted an engineer who didn't care about sales, the industry or about anything anyone else was doing. We wanted someone who only cared about the music, and that's exactly what we got. We definitely did butt heads with the Reverend on many occasions but I’ll be damned if we aren't absolutely satisfied with how the album sounds and feels" states guitarist Chris Brock. "It was a really great experience to get out of our comfort zone and really hone in on all that anger and pent up frustration in Nashville. That whole experience just gave fuel to the most pissed off/depressing music we collectively have ever been a part of."

Even though EARLY GRAVES consider their album to be, for all intents and purposes, a "punk" record, they have further thrown a wrench in the gears by having the enigmatic and schizophrenic Eugene Robinson of Oxbow (Hydrahead, Neurot) appear on the song Here There Be Monsters alongside Steve Austin, who also contributed eerie and ethereal guitar melodies to that song and also vocals to Last Name: Porter.

"I wanted to add a further dimension to the record and have these two iconic vocalists who would take their own interpretation of the songs and run with it to... shit, god knows where. Besides, when both Eugene and Steve were doing their vocals, it literally scared the shit out of me. That's when I knew it was definitely going to be insane" Daniels says with a laugh.

But just as EARLY GRAVES' songwriting is both passionately unforgiving in fury and at the same time, in the grip of an all consuming despair, the lyrical content both reflects this dichotomy in a tasteful yet, unequivocally honest delivery. With such titles as Ghosts Among Us (about a close friend who became a heroin addict and
a prostitute), First Name: William (about a young SF graffiti writer who was murdered in 1998) and House Nigger (about his own personal experiences as a minority in an increasingly conservative/religious and racist scene), singer Makh Daniels gives the listener an unwavering first hand testament of alienation, addiction, heartache and the depthless bitter anger that is born from it.

"The sole reason why I got into punk/hardcore was because it was a community of screwed up kids who couldn't express themselves at all save through this medium. It was a place to go where you weren't the only one who was fucked up, lost and pissed off at the world. It was a home for people without homes." says Daniels.

But more than anything else, We: The Guillotine is a collection of 11 songs by 4 flawed, compulsive, manic-depressive A-holes whose only way to cope is to play punk the way it was meant to be played: bloody as hell and swingin' for the fences with iron fists for a 12th round knockout.

Vocalist Makh Daniels passed away as a result of a van crash while on tour on August 2nd, 2010.