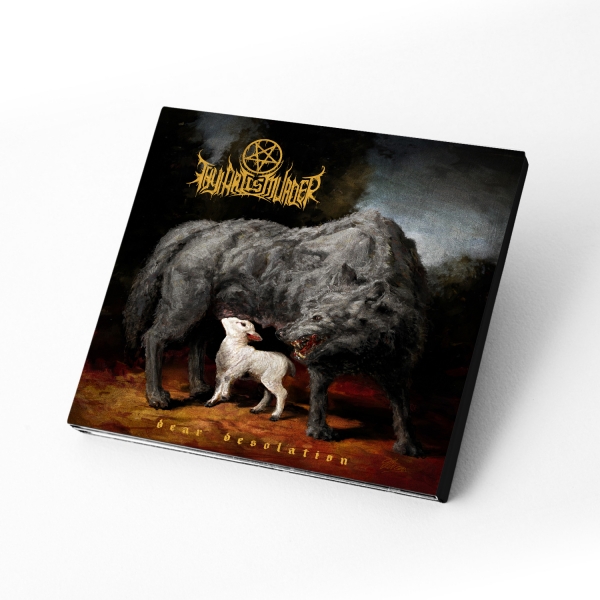 "Dear Desolation" digipak CD from Thy Art Is Murder.

C.J. McMahon:
"I feel the strongest I've ever felt going into a record. Coming back to the fold of our band has reinvigorated me. I missed my brothers, touring, and of course all our dedicated fans around the world who have always given us their all. This new record is going to shape our future; we gave it everything we could and then some. In the past, I was the weakest link and now that I have re-built myself, we are stronger than ever and nothing can stand in our way."

Andy Marsh:
"Hate, War, Desolation; the trilogy series of the path mankind has laid out before himself. We are prouder than ever of our efforts on this record. A lot of time, planning, creativity and teamwork has culminated in what we think is our most completed vision yet: Dear Desolation.”

Eliran Kantor (artist)
"Going through the lyrics, I noticed the metaphor of the wolf and the lamb appeared a few times throughout the record, and I thought it grabbed the essence of the topics the songs touched upon: greed, oppression, cynicism, preying on and misleading the weak, the connection of fear and hope and the way this connects with faith and power.
So I pictured a female wolf, feeding a baby lamb as if it was her own, all while looking at it with a chilling evil grin, licking her lips.
She's not nourishing the lamb - she's preparing a bigger meal for herself."

More from Thy Art Is Murder